Happy Presidential Debate Night!! To celebrate, the latest 2016 numbers from the Rutgers-Eagleton Poll …

There is a lot going on in New Jersey right now: the Bridgegate trial, casino expansion, questions about infrastructure and replenishing the Transportation Trust Fund, debates over minimum wage and pension fund payments, reassessment of school funding formulas, and November elections of our own … just to name a few.  We here at the Rutgers-Eagleton Poll have been doing our best to cover many of these important issues in the Garden State; you can see our latest release on Gov. Christie and NJ issues here.

But with the first 2016 presidential debate a little over an hour away, it’s a good time to take a look at how New Jersey voters feel about the race to the White House and the country as a whole.  New Jersey has not been a swing state for quite some time, typically pretty solidly blue since the Clinton years (Bill Clinton, that is).  On our latest poll, we asked New Jersey registered voters about who they would vote for if the election were held today – both with and without Johnson and Stein in the mix.  When all candidates are included, Clinton leads by double digits: 50 percent to 29 percent for Trump, 6 percent for Johnson, and 4 percent for Stein.  When those who picked someone besides the two main party candidates are asked to choose between Clinton and Trump, the results are slightly more in Clinton’s favor by a few points: 59 percent Clinton to 35 percent Trump.

Even though Clinton leads, her favorability ratings continue to not be anywhere close to what they once were in New Jersey pre-2016.  Nevertheless, she has regained some ground since spring, now at 44 percent favorable (up five points) to 47 percent unfavorable (down three points).  Trump continues to do poorly in the state (though still slightly better than New Jersey’s own governor): 27 percent favorable to 66 percent unfavorable.  New Jersey voters are somewhat split on the direction of the country: 43 percent say it’s going in the right direction, and 53 percent say it is off on the wrong track.

Stay tuned to our Twitter account tonight for some more tidbits on how the 2016 race looks in the great Garden State!  Click here to see a PDF of full results – questions and tables: Rutgers-Eagleton Poll 2016 Election Head to Head September Tables.

Results are from a statewide poll of 802 adults contacted by live callers on both landlines and cell phones from Sept. 6 to 10, 2016, including 735 registered voters reported on in this release. The sample has a margin of error of +/-3.8 percentage points. Interviews were done in English and, when requested, Spanish.

Reading, writing, ‘rithmetic … and the arts!

We are “back in business” here at the Rutgers-Eagleton Poll!!  After what has been a whirlwind summer for us, another semester has started here at Rutgers, and it’s an exciting time for the Rutgers-Eagleton Poll and the Eagleton Center for Public Interest Polling!  I am honored and excited to now be at the helm of this 45-year operation, aka the oldest statewide university-based survey research center in the country.  I have some big shoes to fill, but I am eager to do so and could think of no better way to start off our first poll of the school year with a subject that’s near and dear to my heart – arts education.

Growing up in New Jersey, I was a theater kid, so I know firsthand how important the arts are to learning.  I wouldn’t be where I am today without them.  And almost all New Jerseyans know how important the arts are, too – 95 percent say arts education is somewhat or very important for K-12 students.  But New Jerseyans aren’t matching feelings with actions: few participate in arts-supporting activities.  Participation is limited among a few key groups, especially parents.

Moreover, while a majority of New Jerseyans overall agree that there are enough opportunities for students to attend arts programs in their area, there are stark differences by key demographics.  Socioeconomic factors like wealth and classification of school district influence the extent to which residents believe students in their area have enough access and opportunities to the arts.

This release was done in partnership with the New Jersey Arts Education Partnership as part of their Arts Ed Now Campaign.

ALMOST ALL NEW JERSEYANS BELIEVE ARTS EDUCATION IS IMPORTANT, BUT FEWER HELP TO PROMOTE IT IN SCHOOLS OR COMMUNITIES

NEW BRUNSWICK, N.J. – As the school year gets underway, New Jersey residents deem more than just “reading and writing and ‘rithmetic” valuable to a child’s education. Ninety-five percent believe an education in the arts – which can include dance, media arts, music, theater, visual arts, and other forms of active creative learning – is very (72 percent) or somewhat (23 percent) important for K-12 students, according to the latest Rutgers-Eagleton Poll. Just 5 percent say the opposite.

Yet despite overwhelming agreement that the arts are essential, sizable numbers of New Jerseyans do not participate in related activities that help to promote and increase arts education. More than half have not taken a child to a program or event, donated or raised money, volunteered, or shared something on social media related to the arts either at their local school or in their community within the past year. Almost half have not discussed arts programs or events with others, and four in 10 have not encouraged a child to participate in any way. Few have brought up the issue with figures like teachers, school administrators and elected officials or in settings like school or town meetings or on social media.

“New Jerseyans overwhelmingly believe that our students need arts education, and a number of residents believe more needs to be done. We want to build upon this support and create strong local ambassadors with the help of the Arts Ed Now campaign,” stated Bob Morrison, director of the New Jersey Arts Education Partnership. “This is a statewide call to action for all residents to help increase arts education in schools and communities all across New Jersey.”

Results are from a statewide poll of 802 adults contacted by live callers on both landlines and cell phones from Sept. 6 to 10, 2016. The sample has a margin of error of +/-3.9 percentage points. Interviews were done in English and, when requested, Spanish.

Widespread belief in importance, but participation limited to certain groups

Majorities across the board say that the arts are very important, though there is some difference in degree. Women are more likely than men to feel this way (80 percent to 64 percent), as are those residents who have completed some type of graduate school work (83 percent versus 70 percent of college graduates and 68 percent of those with some college or less). Urbanites are most likely to believe an education in the arts is very important (at 87 percent), while shore residents are least likely to do so (at 62 percent).

Actively participating in arts-supporting activities is limited to particular groups, however. Twenty-two percent of New Jerseyans have not participated in any of the asked-about activities either at a local school or in their community; at the other extreme, just 8 percent have participated in all six activities in the past year.

Being a parent or guardian has a big impact on participation. Most parents have encouraged a child to participate in or have taken a child to attend an arts program or event in the past twelve months, either at school or in their local community; most residents without children in the household have not. Those with children are also more likely than those without to have volunteered or raised money for an arts program in their local school or community, yet even a majority of this group has not participated in either activity. They are likewise much more likely to bring up the issue of arts education with school officials and at school meetings, but are no different from those without children when it comes to town meetings or talking to elected officials. Discussion with others and communication through social media about arts education is also more prevalent among parents.

Age, income, education, and race all have a strong influence on participation. Younger and middle-aged residents who are near child-rearing age are more likely than others to participate in a variety of activities, both in school and in their local community; a majority of senior citizens consistently do not participate in arts-supporting activities. Participation also increases with income and level of education. Overall, those who are of prime parenting age, more affluent, and more highly educated tend to participate in not just one, but several of the asked about activities.

While white and non-white residents have participated in comparable numbers of activities, they differ in the nature of their participation: non-white residents are less likely than white residents to say they have taken their child to a program or event, discussed arts programs and events with others, or brought up the issue of arts education at school meetings.

The classification of one’s local school district (commonly referred to as District Factor Groups, or DFGs) and the state school aid one’s district has received also have some impact on participation, yet only when it comes to speaking up about the arts within the past year, either to school officials or in school or town meetings. For the most part, residents are similar in their participation habits – and the number of activities in which they partake – across school district types.

Student access to arts depends on who you ask

Whether or not New Jerseyans believe students in their area have enough opportunities to attend arts programs and events varies across key demographics. Democrats, women, non-white residents, those in lower-income households, those with less education, and those in urban and southern areas of the state are all less likely to agree that students have enough access to arts programs in their local school. Virtually the same pattern holds when it comes to arts access within the local community. Age is also a factor for both areas.

Belief that students do not have enough opportunities sharply increases with amount of state school aid funding and district classification. Residents who live in the poorest school districts (classified on the DFG scale as “A” or “B”) are less than half as likely as those who live in the wealthiest districts (classified as “I” or “J”) to believe students in their area have enough arts opportunities in schools (38 percent agree versus 78 percent agree); they are similarly much less likely to feel the same about their community (43 percent agree versus 71 percent agree). Likewise, less than half of those in school districts who receive the highest levels of state funding (which tend to be the poorest districts) agree that there are enough opportunities either through school or the surrounding community.

“Socioeconomic factors like wealth create significant barriers for students when it comes to accessing arts education and opportunities,” said Ashley Koning, interim director of the Eagleton Center for Public Interest Polling at Rutgers University. “While New Jerseyans see the arts as fundamental to education and participate at similar rates, children in some of the most disadvantaged areas of the state have the fewest chances to benefit.”

About the Arts Ed Now Campaign

The New Jersey Arts Education Partnership (NJAEP) is the unified voice for arts education in New Jersey. NJAEP was originally founded in 2007 as a cosponsored program of the New Jersey State Council on the Arts, with additional support from the Geraldine R. Dodge Foundation, New Jersey Department of Education and Music for All Foundation. Additional support has been provided by the Prudential Foundation, and ArtPride New Jersey Foundation. The mission of the NJAEP is to provide a unified voice for a diverse group of constituents who agree on the educational benefits and impact of the arts, specifically the contribution they make to student achievement and a civilized, sustainable society. Additional information is available at http://www.artsednj.org. 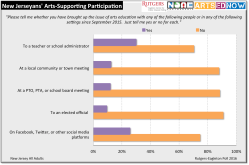 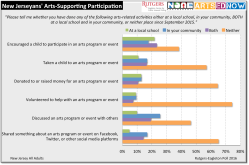 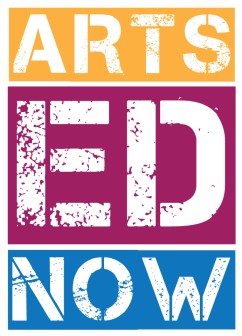