Results of a Joint Poll with Siena and Roanoke Released Today

Over the last week we carried out our latest Rutgers-Eagleton Poll of New Jersey with an interesting twist. In conjunction with two other statewide academic polling centers we fielded a large set of the same questions to respondents in our respective states. Today we release the results in a lengthy report that summarizes the interesting differences and similarities between the three states of New York (Siena Research Institute), Virginia (Roanoke Institute for Policy and Opinion Research) and Rutgers-Eagleton. The report speaks pretty much for itself, but if you want to see the full set of questions and crosstabs for all three institutions, you can find them here.

For a PDF of this release with the New Jersey tables and crosstabs, click here.

Full text of the release follows.

Loudonville, NY; New Brunswick, NJ; Roanoke, VA. – A majority of voters in New York (64 percent), New Jersey (59 percent) and Virginia (56 percent) have a favorable view of Former Secretary of State Hillary Clinton, and name her most often in each state as the one eligible person that they would most like to see as the next President according to simultaneous identical polls conducted by Roanoke College in Virginia, Rutgers-Eagleton in New Jersey and Siena College in New York.  In early 2016 Presidential horseraces in each state, Clinton tops New Jersey Governor Chris Christie, Senator Rand Paul and Congressman Paul Ryan by over 35 points in New York, 8 (Christie) to 14 (Paul) points in Virginia and even leads Christie by 10 in New Jersey while up there by 25 to 29 over Ryan and Paul.

“It’s early, very early, but in these three states worth 56 of 270 electoral votes needed to win, Hillary Clinton is well-liked, the top choice by margins of 4 or 5 to one in New York and Virginia and named more than twice as often in Governor Christie’s home state.  Head to head, she is untouchable in New York, has majorities in New Jersey and a lead in the potential battleground state of Virginia over not only two lesser known Republican hopefuls, Paul and Ryan, but over Christie who can no longer muster 50 percent favorable in any of the three states,” according to Don Levy, Director of the Siena College Research Institute.

Asked to vote in favor of or opposed to 12 national initiatives, a majority of voters in all three states support seven and oppose one.  Overwhelming majorities are in favor of raising the national minimum wage to $10.10 per hour; legalizing the use of marijuana in all 50 states for medical purposes; approving a path to citizenship for people who are in the U.S. illegally, but are working, have no criminal record and pay taxes; approving the Keystone Pipeline to bring oil from Canada to the U.S.; using federal funds to make free Pre-Kindergarten education available to all children; and establishing a national gun registry.

Legalizing same-sex marriage in all 50 states is strongly supported in New Jersey and New York while Virginians are in favor by 53 to 40 percent.  Large majorities, greatest in Virginia, oppose allowing the National Security Agency (NSA) to tap domestic phone lines in the interest of national security. 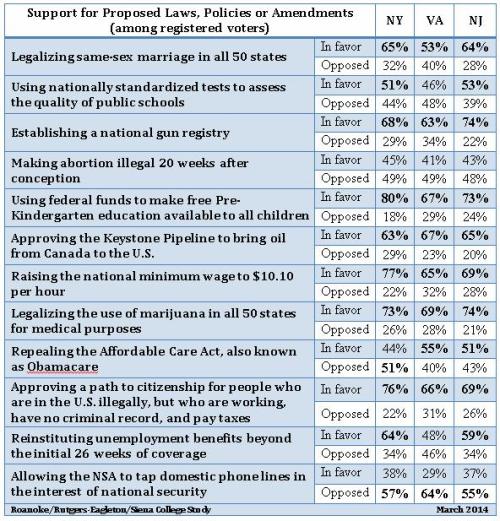 “We tend to spend more time focusing on how voters differ across states, but here we find that despite differences in geography, racial and religious makeup, and partisanship, there is more agreement than not in these three states on seven current issues. Apparently voters share more opinions than the media leads us to believe with their focus on a hyper partisan world,” according to David Redlawsk, Director of the Rutgers-Eagleton Poll.

“Given a huge disparity in gun ownership rates – half in Virginia compared to one in seven in the two northern states – the much smaller differences on support for a national gun registry are surprising.  Virginians are less supportive of stricter gun laws, but those differences are relatively small. New York and New Jersey have much tougher restrictions on guns and gun owners; perhaps those differences are a factor in shaping opinion,” according to Harry Wilson, Director of Roanoke’s Institute for Policy and Opinion Research.

On four current issues – the Affordable Care Act, abortion, standardized testing and an extension for unemployment benefits – the voters of New Jersey, New York and Virginia do not speak with the same decisiveness nor the same mind.  Given the opportunity to vote in these polls on repealing the Affordable Care Act, also known as Obamacare, a majority of Virginians are in favor, a small majority of New Jerseyans agree, but a similarly small majority of New Yorkers oppose repeal.  On two other current hot button issues, both New York and New Jersey support both reinstituting unemployment benefits beyond the initial 26 weeks of coverage and to a lesser degree, using nationally standardized tests to assess the quality of public schools, while in Virginia, both issues find voters split.

The one issue on which voters of each state are closely divided is making abortion illegal 20 weeks after conception, a proposal currently being advanced by some in Congress.  Voters in all three states lean towards opposing this measure, but only in Virginia does opposition reach beyond the margin of error and in no instant does opposition reach 50 percent.

“While voters in these three states agree on and endorse initiatives covering a wide range of issues – same-sex marriage, medical marijuana, the Keystone Pipeline and the minimum wage – voters both within these three states and across borders cannot come to any consensus on some of the key issues that are drawing the political battle lines today including abortion, Obamacare and unemployment benefits.  In fact, asked whether the greatest problem we face today is too much government or income inequality, New Yorkers say ‘it’s inequality,’ Virginians say ‘too much government’ and New Jersey is split,” Levy notes.

“Another line in the sand is climate change.  New Jersey and New York emphatically say that they think that the major storms that have hit the East Coast over the last two years are the result of global climate change while Virginians are not convinced,” Wilson adds.

Rating the Governors, States and Country

Of the three Governors, Andrew Cuomo in New York, Chris Christie in New Jersey and Terry McAuliffe in Virginia, Cuomo has the strongest favorability ranking in his own state at 59 to 34 percent followed by McAuliffe’s 47 to 33 percent and Christie’s 48 to 40 percent.  Away from their home state, Christie is best known but gets breakeven favorable/unfavorable scores in both New York and Virginia.  McAuliffe, the Governor with the shortest tenure, is little known outside of Virginia while Cuomo is seen favorably in New Jersey, 47 to 19 percent but is neither well known nor popular in Virginia at 27 to 33 percent.

Another point of agreement across these three states is that voters say that the country is headed in the wrong direction rather than being on the right track by nearly identical scores – NJ 56/32, NY 54/36, Virginia 59/32.  And when asked to assess the direction of their own state, voters are more positive about their home than the nation but no state makes it to 50 percent saying ‘right track.’  While Virginians are guardedly optimistic at 47 percent right track to 40 percent wrong direction, New Yorkers and New Jerseyans lean negatively. 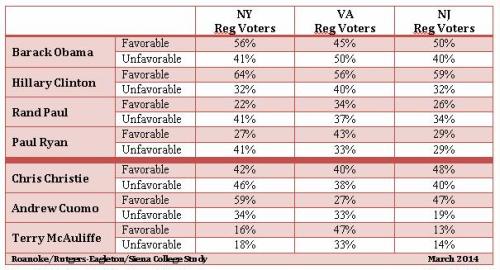 “Still, given a chance to vote with their feet when asked across all three states to choose where they would most like to live, a large majority – ninety percent in Virginia, two-thirds in New York and almost six in ten in New Jersey, say, despite any warts, home is sweet home.  Among those with a wandering eye, Virginia calls most loudly as a quarter of both New Yorkers and New Jerseyans are ready to head south,” Redlawsk added.

“Whether we describe our politics as hyper-partisan, divided or gridlocked, this three-state study shows that large majorities of voters from New Jersey, New York and Virginia agree on many issues.  Still, given their sobering agreement on the country currently moving in the wrong direction, they appear more frustrated than optimistic.  At the same time, on some issues including Obamacare, the role of government and abortion, deep divides are evident.  The 2016 Presidential election is a political eternity away.  While some of the issues in this study may be decided by then, it is more likely that Hillary Clinton and the other candidates, both Republicans and Democrats, will need to address both the areas of agreement as well as those on which Americans disagree when the campaign heats up.”